Are you more of a Darwin or a Verne? 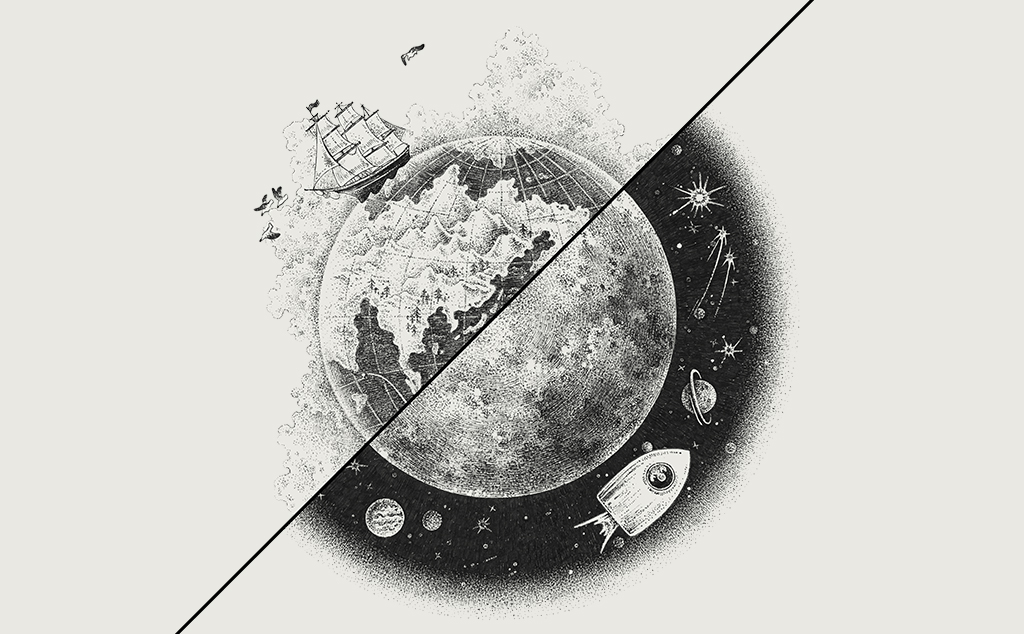 Darwin was a scientist. And he was one because he just was, because something inside him told him he needed to be that. His father wanted him to be an Anglican priest, but the boy was stubborn. The call of the wild, as Jack London would say. He started to study medicine, although that was not his thing either. He felt closer to invertebrates than to humans. The silence of beetles, grasshoppers and even leeches said more to him than the moaning of a gentleman with a cold. Not to mention those beautiful orchids. Biology, botany and geology were his world. And he was convinced that if he spent enough time talking to a stone, the stone would eventually talk back.

Verne was a storyteller. And he was one because he just was, because something inside him told him he needed to be that. His father wanted him to be a lawyer, like him, and take over the family firm. And Jules really tried hard; and he also tried to be a stockbroker, he tried so very hard… but the call of the wild would not be denied. He could not help but be more interested in rhyming two words that had never before been put together in a poem than in reading a prosaic judgement in a boundary dispute. He could not explain why he was more attracted to the boards of the stage than the parquet floor of the Paris Stock Exchange. In truth they creaked a little more, but that was probably because they were trying to tell him something.

Darwin was a traveller. For five years he travelled halfway around the world aboard the Beagle, from Plymouth to Tierra del Fuego, mapping the whole of South America. He sailed through Argentina, Chile, Peru, Ecuador, Uruguay, the Strait of Magellan… And to get there he crossed an ocean.

Verne was a traveller. In the real world, physically, he travelled very little. He had a little sailing boat that he crossed the Mediterranean in a couple of times (he said that a voyage was incomplete if it did not include time on the sea), but his most notable trip was when he stopped over in Vigo (where he made Captain Nemo drop anchor too). Not much more than that. But Verne did travel in his imagination. His imagination took him to the moon and to the centre of the Earth, it allowed him to sail 20,000 leagues under the sea, be the first to reach the South Pole, cross Russia with a message for the Tsar, fly over southern Africa in a balloon, circumnavigate the world in 80 days… Nobody had ever travelled so far before in their imagination. Or allowed other people to travel so far.

Darwin was an observer. He took meticulous notes on everything he saw, collected samples, observed the strata of the rocks, measured ocean currents… He was a follower of the school of inductive reasoning, which is why all those observations, all that data, did not just sit around inside his head, but were gradually being connected to each other. Little by little… And then, he understood everything.

Verne was an observer. He was curious about the science of his time. He studied it obsessively, he marvelled at it and at the same he was left wanting more. What would come next? Until he realised that there was no need for anyone to answer that question for him. Because he decided that he would be the one to answer it for other people.

What a great team they would have made!

Darwin and Verne were alike in many ways. They were bearded, unconventional, passionate, daring, observant, geniuses who were ahead of their times. Darwin, with his Theory of Evolution, took Science towards new limits. And Verne, with his Extraordinary Voyages, picked up science where scientists had left off and catapulted it to infinity by reinventing it in Fiction.

But, above all, Darwin and Verne complemented each other. Through science and observation, Darwin was able to explain the world as it was. And through imagination, Verne foresaw the world as it might be. And the complementary duality of Darwin and Verne can be seen in everything around us. Everything has some Darwin in it and everything has some Verne in it.  In people, in business, in brands, in communication. Rationality is complemented – and made whole – by feelings; data, by experimentation; evolution, by revolution; technology, by intuition; science, by fiction; understanding, by imagination…

For us, Darwin & Verne is not just a name, it is a philosophy, a way of life, a way of working and a way of looking at the world around us. It’s what we are. We are very much a Darwin. And very much a Verne. That is why we are called Darwin & Verne, and that is why today, we – like them and with them – are embarking together on a journey that will be an extraordinary adventure.